Brownies brownies brooowwwwniiieees!  I love brownies (and anything with chocolate) and am SO excited to share this Fudgy Paleo Brownie recipe with you!  These fudgy paleo brownies are: 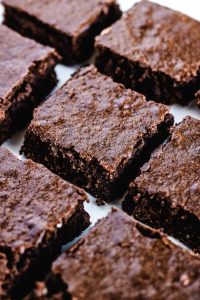 What are paleo brownies?

Paleo brownies aren’t quite like traditional brownies.  Paleo brownies (and all paleo baked goods) lack wheat flour – which contains gluten.  Gluten is what gives traditional baked goods their amazing texture.  While it’s hard to emulate the elastic nature of gluten in paleo baked goods, you can still make delicious gluten free and paleo treats by using almond flour, or other gluten free paleo approved flours, like arrowroot, tapioca, and coconut.  I bet that even your non paleo gluten eating friends will love these fudgy brownies!  Along with being gluten free, paleo brownies are dairy free and white sugar free! 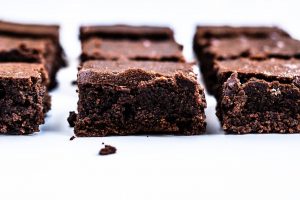 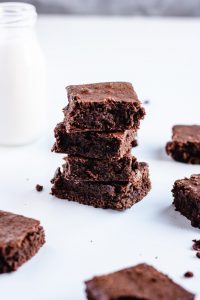 How to make paleo brownies

For this recipe, order matters.  Make sure to follow the directions!

1) In a mixing bowl, combine the coconut sugar and arrowroot powder.

2) Over medium low heat, combine the maple syrup and oil and heat gently until it starts to bubble.  You want it to be hot enough to dissolve the coconut sugar, but you don’t want to boil it or overheat it.  As soon as you start to see small bubbles, keep it on the heat for another 15 seconds and it’s good to go.

3) Poor the heated oil/syrup mixture into the bowl and stir until the sugar dissolves. Let sit for 3 minutes.

5) Add the vanilla, salt, cocoa powder, and almond flour and stir until combined. 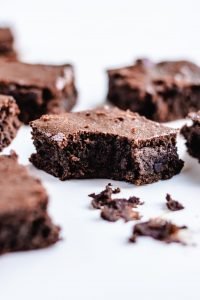 Can you freeze paleo brownies?

Yes, you can!  These brownies freeze well and can be saved for a future brownie binge – uhhh I mean a later date.   Store in an airtight container for up to a few months.  Just let them thaw to room temperature or gently warm them in the oven or toaster oven. (I’m anti microwave ?) Or, eat them straight from the freezer if that’s your thing! 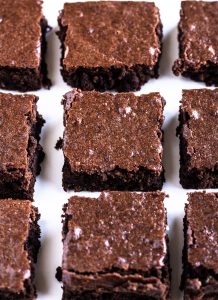 Follow me on Instagram and use the tag #simplyjillicious if you make these fudgy paleo brownies!  I’d love to see them!

And don’t forget to sign up for my monthly newsletter here. 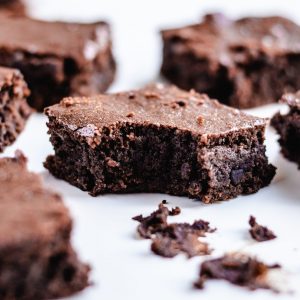 These fudgy paleo brownies are made with almond flour and the perfect mix of coconut sugar and maple syrup. There is NO almond butter in these babies and they are SO good! They're truly the best paleo brownies!
Prep Time8 mins
Cook Time25 mins
Total Time33 mins
Servings: 9 brownies
Author: Simply Jillicious

You don't want to over bake these brownies. They will continue to cook in the pan as they cool. Start checking them around 23 minutes and watch for the edges to start pulling away from the parchment paper. Once you see the edges start to pull away, and the middle is firm to the touch, they are most likely done. My brownies were perfect at 25 minutes. Enjoy!
Recipe Type: Dessert
Cuisine: American
Keyword: brownies, fudgy, paleo
Diet: dairy free, gluten free, paleo, refined sugar free
Pin Recipe
Tried this recipe?Mention @simply_jillicious or tag #simplyjillicious

Hungry for more?  Try some of my favorite recipes!

Psst…want to save money on healthy food?  Check out Thrive Market!